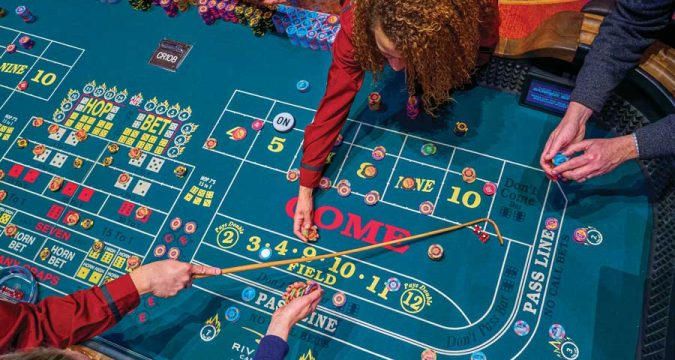 Dices have been an integral part of the casino and gambling culture since the very beginning of gambling. It is possible to find records of dice being used in China as early as 600 B.C. Even though there have been some improvements in terms of quality, the central design of the dice has not changed. It is partly due to its power while enabling a gameplay experience based on luck and randomness.

It is no surprise that dice-based gambling games are some of the most popular ones in Las Vegas and other places where gambling is the norm of life. And we understand it so well if you want to explore the different types of Las Vegas dice games in the world right now. But, of course, you do not want to get bored with a simple dice-based game. So instead, there must be some variety, right? Well, you are in luck. 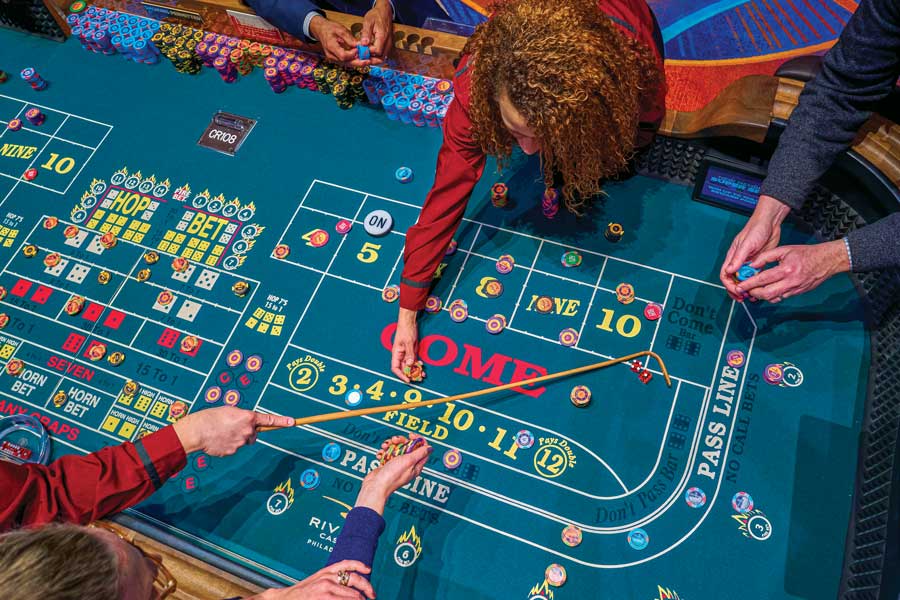 This article has talked about the seven different types of Las Vegas dice games you can play — online or offline as per your convenience. We could not list all the dice-based games you could find in Las Vegas casinos as there are too many. Therefore, we have picked only the seven best options based on the overall popularity and user base.

If you are new to Las Vegas dice games and want to check out various options, we can get started with the article. We must warn you, Dice-based Las Vegas games may look complicated at first. However, it must be noted that thousands of people play these games every single day via online and offline casinos. So, you can understand the core concepts of these dice games with minimal effort. We have talked about the significant rules of each game while listing them.

Craps is considered one of the most popular Las Vegas dice games you can play today. It has retained its top position for decades and centuries while attracting thousands of Las Vegas gamblers every day. So, it is no surprise if everyone recommends you Craps when you ask them about the best dice-based game in Las Vegas. Unlike some other games, though, Craps does not have a clear record of history. While people know that Craps had a gradual development, not many understand how it took place. For instance, there are multiple narratives over how Craps got its influence.

Some believe that Craps is an improved version of Hazard, a classic gambling game from England. On the other hand, the second narrative says that Craps had its origins from a French game named Crabes. In either case, Craps indeed became one of the most played dice games in Las Vegas within a short period as compared to other games. Over time, the rules of the game also witnessed several modifications. Though the basics have stayed the same, you can spot many differences between the first game of Craps introduced in gambling spaces and the game you can find in today’s online and offline casino spaces.

As far as the gameplay is concerned, Craps is simple. In case you have not guessed it already, a game of Craps wants you to bet on the outcome of their dice rolls. Based on the variety of the game, the number of dice rolls would vary. Similarly, the odds of betting will also have an impact. Players of Craps have the option to choose their sides. They can either bet against the casino or combat one or many of the players. Of course, the final amount you win from the game will depend solely on luck. However, most people forget that they can focus on side bets and main bets when playing Craps.

The main bets in a game of Craps will be trying to predict the numbers from a series of dice rolls. If you bet on the right set of numbers, you can win big from the game. However, side bets on the game work in a different manner. In this case, you can find two categories: pass-line bets and don’t-pass line bets. You may want to take sides after looking at the odds in this matter. Of course, you do not have to be obsessed with these side bets. Instead, you can consider them an additional point. For the most part, make sure that you get to enjoy the game of Craps when you are rolling your dice.

Last but not the least, you can find an impressive variety of Craps games in a typical Vegas casino. The situation will be the same if you look at the popular online casino spaces as well. It does not surprise us to know that Craps is the dice game responsible for contributing the highest amount of money in the world of Vegas gambling. Thanks to its impressive blend of luck and randomness, people have an obsession with how the dice rolls end up. Based on how much time and effort you invest, you can choose between an impressive variety of Craps games, which can be a solace if you are worried about getting bored.

We know it was a lengthy description for one of the many Vegas dice games on the list, but Craps has got so many things going on related to the scene. And a better understanding of Craps will always help you before you reach the gambling table. 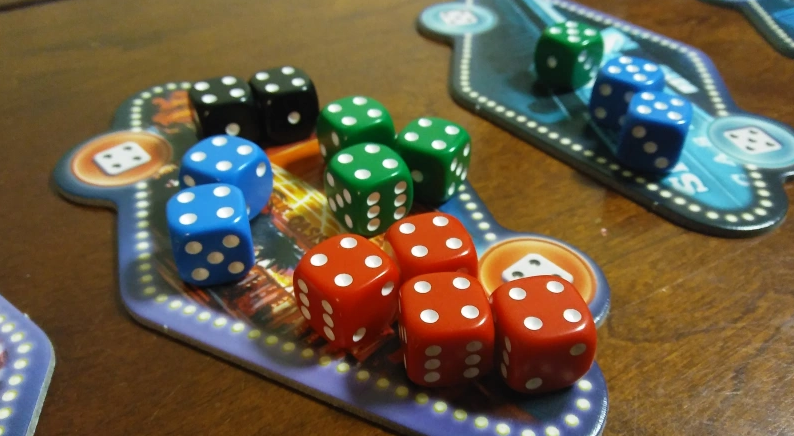 As we said, Hazard is considered one of the potential origins of the more popular game, Craps. Since people see Craps as the better version, there was a downfall in the popularity of Hazard. However, it still remains one of the best dice-based games you can find in a Vegas casino. As we mentioned earlier, Hazards has its origins in England, and it is said that British soldiers used to play this game during World War I. However, at the time, dice were equipped with signs instead of numbers. As a result, you may find that a game of Hazard may use different terminology that you have gotten used to while playing Craps.

You may want to master all these terms if you want the best gameplay experience from Hazard. If we keep this difference in terminology aside, you can find many similarities between Craps and Hazard. For the most part, you can bet against the casino or the player. A shooter will make their point before other players can place their wages. Then, based on how the first player performs in the second dice roll, Hazard will tell you whether you win or lose. When placed strategically, the bets on Hazard can give you an impressive set of winnings.

Here are some rules you may want to keep track of while playing a game of Hazard.

●      The first player, the shooter, will roll the dice first and try to make the main point, which lands between 5 and 9. Of course, it may not happen in the first throw. Until there is a number from the said range, the player will keep rolling the dice.

●      After this point, other players in the game can place their wagers. They can put their bets against the shooter or the casino. Of course, the results will depend on how well the shooter does in the second roll.

●      In the second roll of dice, the numbers are watched out for. These numbers will decide what happens to the bets put by other players. For instance, the shooter will win if the shooter gets a number that nicks the number in the first throw. Different results require different numbers for nicking.

If the shooter loses, the next player will have their chance. This process gets repeated while all players can put their bets. You should keep in mind that casinos may have specific rules for a game of Hazard. As we said earlier, it has gone through many modification attempts in the past years. You should not be surprised if you do not find the same type of Hazard game everywhere. On the other hand, you should be ready to embrace the differences in the rules and rely on the sportsman spirit. After all, like other Vegas dice games, Hazard does not offer you much control over the results.

By the way, you cannot find Hazard as often as you find Craps in a casino.

As the name says, Simplified Craps is the less complicated version of a game of Craps. You may think that a game of Craps involves too many rules and conditions to succeed. However, with Simplified Craps, you do not have to pay much attention to these complex rules. Instead, the game already has some rules on which patterns win the game and which ones lose. For instance, if the player finds themselves with 2, 3, 4, 10, 11, or 12, it means they have won the game. On the other hand, if they end up with numbers like 5, 6, 7, 8, or 9, the game is lost. If you think these rules make the game too simple, you should stick to Craps.

As you may have noticed, Simplified Craps is not rich when it comes to side bets. Even though it could be using one of the familiar Craps tables, the gameplay would stay different for the most part. Therefore, when you are playing Simplified Craps, you have to place your bets with utmost care. Otherwise, you may end up losing what you put on the table. It also depends on the rules of the casino. Once again, you can find many sub-varieties of Simplified Craps in casino spaces. In many cases, these varieties may have a different theme than the others.

Sic Bo had its origins in Asia and made its way to the United States casino scene by the 1980s. The game involves several dice. In this case, we are talking about three dice, and players get to place their bets. Once again, you have the option to choose different side bets when playing the game of Sic Bo. In addition, you can pursue multiple side bets at a time if you want. Compared to other Vegas dice games we have talked about here, Sic Bo is simple.

Chuck A Luck seems to have originated in Australia, and the game is often considered a modified version of Sic Bo. If you thought Sic Bo was simple, you should check out what Chuck A Luck has to offer. But you must understand that its simplicity is one of the reasons why Chuck A Luck is so popular among users. The game can give you impressive jackpots. So if you want to get started with Vegas dice games, you may love Chuck A Luck.

Klondike is another simple Vegas dice game that you can always check out. The core objective while playing this game is to get a better combination than the banker. You should also make sure that you do not have the same combination that the banker has got. If you get the same combination, you will lose the game. You also have to keep track of the hierarchy while playing Klondike. You can strive for 1, which can be called the ‘ace’ in the game.

Last but not least, we have Banka Francesca, which is not as simple as Sic Bo or Chuck A Luck. Even though the game uses three dice, you can have three possible results: big, small, and aces. These results are calculated by adding the values of each dice. In addition, the game can pay you up to 60:1, which is excellent. It needs to be noted that the banker will keep rolling the dice until there are any of the three situations. It can be quite a lot of fun.

As you can see, there is more to Vegas dice games than Craps. Of course, Craps may be the best place you have for fun and games, but it should not stop you from checking out other options like Chuck A Luck, Banka Francesca, or Sic Bo.